Join the Fight Against IBD Project 2012 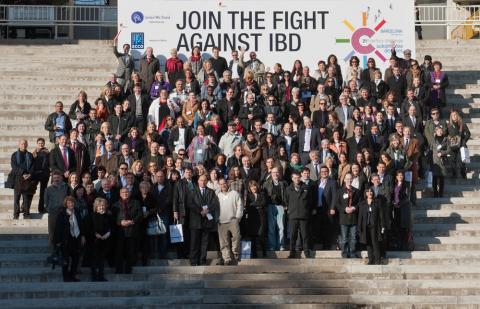 Barcelona, 15 February 2012 – The European Federation of Crohn’s & Ulcerative Colitis Associations (EFCCA), in partnership with the European Crohn’s and Colitis Organization (ECCO), has launched “Join the Fight Against IBD” – an initiative aiming to enhance the general understanding of the physical and socioeconomic disease burden and accelerate the dissemination of new standards of care of irritable bowel diseases (IBD) among the health institution, healthcare providers and health authorities entities.

IBD is the name given to a group of gastrointestinal diseases classified as autoimmune diseases that affect 2 percent of the world’s population and are characterized by the body’s progressive attack on its own healthy tissue. There are three primary types of IBD. The two most common types are Crohn’s Disease and Ulcerative Colitis, followed by Indeterminate Colitis, which bears characteristics of the first two types. There are nearly 5 million people worldwide living with IBD.

“Join the Fight Against IBD” aims to break the shame, isolation and embarrassment of the nearly 5 million people suffering from this progressive and debilitating disease by:

• Working closely with the European Crohn’s and Colitis Organization to accelerate the global dissemination of new approaches to the care and treatment of the disease, with a special focus on fighting against health inequalities at EU level.

13,000 patients from 24 countries have participated in 4 patient surveys, including the IMPACT survey, coordinated by EFCCA. The results of this Europe wide study will be presented at the European Congress of Crohn’s and Colitis Organization (ECCO) to be held in Barcelona from 16th to 18th February 2012.

“The main findings of the EFCCA led IMPACT survey shows that even with the availability of immunosuppressive and biological therapies for more than a decade and adequate access to care, the impact of IBD on patients‟ lives is still immense,” says Marco Greco, President of EFCCA. “Efforts need to be made by patient associations, healthcare professionals and policy makers to address these issues. This European survey offers new angles on how to further reduce the burden of disease and important recommendations for treatment and care”, he added.

“The IMPACT data results are a „wake-up call‟ said Daan Homes, President of ECCO. “ECCO is actively working to further validate the evolving standards of care in IBD, which include treating beyond symptom control, tighter monitoring to adequately treat patients and using objective parameters to diagnose the disease – such as imaging and biomarkers,” he added.

EFCCA will also present compelling data from its large, patient-driven IMPACT survey at the next 7th ECCO congress in Barcelona. This survey is considered to be one of the largest IBD patient surveys carried out in Europe: 4,990 patients from 24 countries have participated in the patient survey, coordinated by EFCCA, which was available in 10 languages. The study started in November 2010 and was completed in August 2011.

The most important hurdles that IBD patients report in the survey are related to:

• The length of time before diagnosis

• The high number of hospital admissions

• Pressure at work due to repeated sick leave

• The negative effects on personal relationships leading to significant decrease of quality of life, disability and distress.

Other insights gathered from IBD patients reported in the IMPACT study call for more adequate medical access and better-informed treatment options. The IMPACT survey is supported by an educational grant from Abbott, the global healthcare company.

EFCCA is an umbrella association representing 27 patients associations across 26 European countries with more than 100,000 members. EFCCA aims to work to improve life for people with ulcerative colitis or Crohn’s disease (together called Inflammatory Bowel Disease, or IBD), at European level. Its main objective is to improve the well-being, quality of life and quality of care of people with IBD of all ages, working both at European level and alongside member associations; to improve public awareness of IBD and the concerns of European patients; to encourage research into the disease; and to promote equality of opportunity for people affected by IBD.

The European Crohn’s and Colitis Organisation (ECCO) was founded in Vienna, Austria on March 24, 2001 as an umbrella organization for national Inflammatory Bowel Diseases (IBD) study groups in Europe. ECCO successfully expanded from an organization comprising 14 Country Members to an association assembling the national study groups of 31 European and affiliated countries.

ECCO aims to improve research, education and collaboration in the area of Inflammatory Bowel Diseases (IBD) for the purpose of improving the care of patients with IBD. As part of this mission, ECCO will promote all efforts that lead to animprovement of current therapies or procedures, which will ultimately to complete disease control, that is, cure.